Unveiled in the 1970’s, the G-Class is by far Mercedes’ oldest serving model. But while its exterior styling has largely remained unchanged, it’s a completely different story on the inside. Packed with the latest automotive technologies developed by the sharpest minds at Mercedes, the G-Class is one of the most high-tech cars on roads today – especially the range-topping G-63 AMG.

Under the retro body, there lives a true modern sports SUV, one that can challenge – and even outshine – segment-leading behemoths like the Range Rover Sport, the BMW X5M, and even the might Porsche Cayenne. Over the course of this blog post, we’ll discuss why the Mercedes G63 is considered as the king of SUVs.

The 4-liter turbocharged V8 you find in the G63 AMG is the same unit you get in Mercedes’ flagship sports car, the AMG GT-S. But while it produces 516 hp in the GT-S, it produces a staggering 577 hp in the G63 AMG. The torque figure is even more insane. You get 627 ft-lbs. of, which is more than even a Lamborghini Aventador. To help you wrap your head around these figures, we’ll give you some performance numbers. The top speed is 137 mph. If you’re thinking that’s not much, consider that this is a car that weighs well over 5,000 lbs. However, what will really blow your mind is the speed at which the G63 AMG accelerates. It’ll go from 0-60 mph in just 4.5 seconds. It’ll easily leave 911 Carreras in its dust on the drag strip. 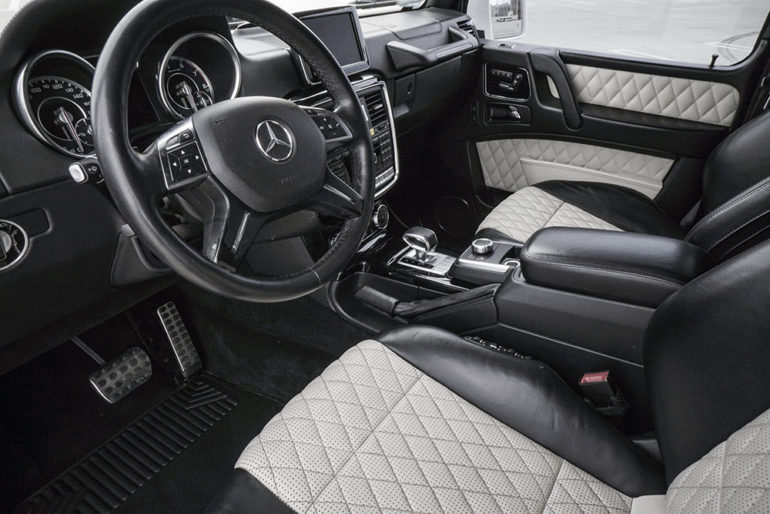 But if you think the regular G63 AMG is impressive, you’ll be amazed to learn what German tuning company, BRABUS, has done with the G63. The Mercedes G63 by BRABUS produces an astonishing 789 hp and 737 ft-lbs. of torques. That is hypercar territory, and you know it.

Moreover, the G63 is also fitted with heavy-duty suspension and a complex all-wheel drive system, which means that it can conquer just about any type of terrain.

The cabin of the G63 AMG is much closer to other high-end Mercedes-Benz models. It’s beautifully designed, and there’s an abundance of premium materials like leather and carbon fiber. You get a TFT instrument display panel and an excellent infotainment system. When it’s not in beast-mode, the G63 is a supremely comfortable SUV – a perfect long distance cruiser.

If you’re ready to experience the excitement of driving a Mercedes-Benz G63 AMG, LVC Exotics offers best exotic car rentals in Las Vegas. In addition to the G63, we offer a variety of dream exotic rental cars, including Lamborghinis, Ferraris, and Bentleys. Contact us for further information.