If you’re into supercars, you’d have some idea about how Bentley cars are some of the most expensive exotic automobiles on the market today. Some of its models even sell for as much as $300,000, making them even pricier than an average house!

Most supercar enthusiasts will agree that Bentleys are worth their money. The cars are what you would consider the epitome of luxury. Not only are they extravagant, but their car parts are also just as high-end and high-performing. As if that wasn’t good enough, Bentley cars also feature all things a person could possibly want in a car; weightlessness, durability, safety, eco-friendliness, and virtually anything else you’d fancy imagining.

The Bentley Continental GTC, the 2006 convertible version of the Continental GT, is no exception. Irrespective of it being released more than a decade ago, its popularity among supercar lovers has not dimmed down. Let’s have a look at why the model is so sought-after!

At just a first glance, it becomes clear that the Bentley car is a remarkable work of engineering. It makes for an amazing open-top ride that seats 4 people comfortably with a lot of legroom for all 4 passengers.

The supercar features the all-wheel-drive system and a W12 engine that’s capable of producing a peak of 567 bhp and 700Nm of torque at maximum. When it comes to speed, the Bentley goes from 0 to 100 mph in a matter of 4.5 seconds!  The GTC also uses a modern brake and handling system. The 3-spoke multi-functional steering wheel gives you complete control of the car’s reins, making for an incredibly safe driving experience. 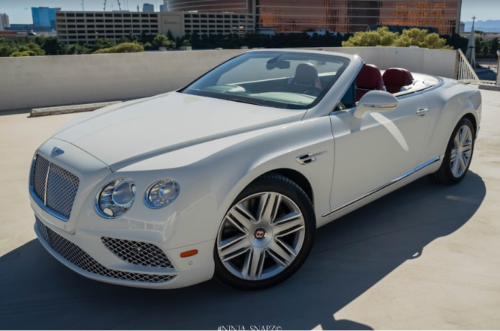 More of its safety features include an automatic seatbelt function, GPS tracking, park distance control, and an ultrasonic alarm that goes off if the system detects any air pressure changes in your car cabin, effectively preventing any thieves from stealing your car.

The combination of ergonomics and advanced technology is what makes riding the GTC so convenient. An infotainment system comprises an MP3 player and a 15 GB storage space for mapping out data and music. The front seats’ lumbar support, heating, and memory functions help you seat yourself comfortably, and the automatic climate control technology brings the temperature up or down within seconds to keep you cool or cozy, whatever the outside condition is like!

Compelled to take a ride in our Bentley Continental GTC? You’ll be thrilled to know we’re renting it out at extremely cost-effective rates with no limits on the mileage!

Contact us now at LVC Exotic Rentals in Las Vegas for Bentley rentals. Choose any supercar from our fleet collection. We’re a leading luxury car rental service Las Vegas with one of the most versatile inventories in the entire market to help you make the most out of your trip to the city.